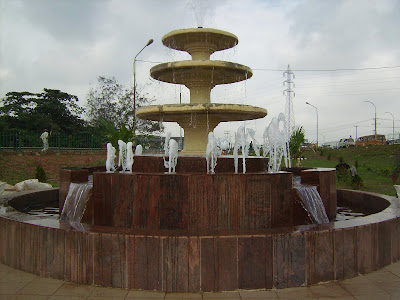 This fountain is located inside the Ojota Loop where MKO Abiola's statue lies. Me thinks it signifies the renewal of life.
Posted by Unknown at 12:14 PM 2 comments: Links to this post 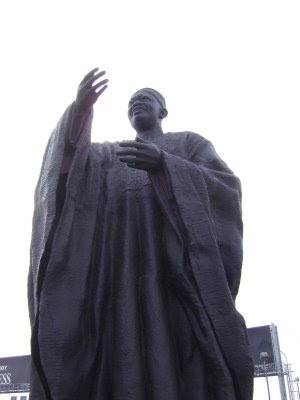 MKO Abiola was a philanthropist with a wide toothy laugh. It was one reason many Nigerians were able to trust him with their votes which was unfortunately rejected by the military hierarchy in 1993.
Posted by Unknown at 11:02 AM No comments: Links to this post 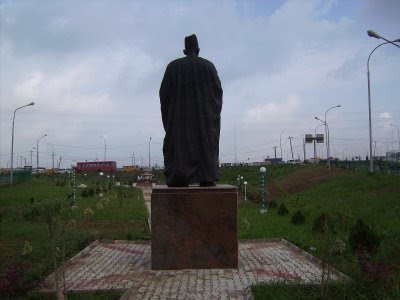 This is the statue of the late Chief MKO Abiola, acclaimed winner of Nigeria's freest and fairest presidential elections. This statue was unveiled in July to mark the anniversary of his death in custody 10 years ago. It was commissioned by the Lagos State government and was sculpted by Bunmi Babatunde head of the Universal Studios of Art, a fast rising art house in Lagos.

This new sculpture replaces an old shoddy representation of the symbol of Nigeria's democracy. It is 9"8in high and is located at the Ojota Loop at Ojota Lagos. Hence, my naming it Abiola of Ojota.

About 300m to this statue is the monument dedicated to the memory of his wife Kudirat who was murdered in cold blood by the former military ruler Sani Abacha. There's a previous post here
Posted by Unknown at 7:20 PM No comments: Links to this post 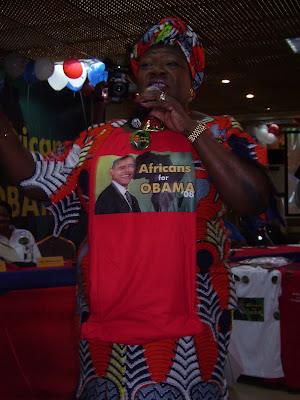 The lady who fronted the Africans for Obama campaign here in Lagos is going through some tough time at the moment. Prof. Ndi Okereke-Onyiuke and her group raised almost $1 million recently at a dinner to support Obama. She has since come under investigation of the financial graft body here as to the intent and purposes of the funds raised. Many opinion writers have crucified her already and she is definitely going through some tough time.

An opposition party has even asked her to resign her position as head of the Nigeria Stock Exchange where she's been for a long time.

I have been away from the country for a while and that's why I have not been blogging. But I'm back.
Posted by Unknown at 1:45 PM 4 comments: Links to this post

Email ThisBlogThis!Share to TwitterShare to FacebookShare to Pinterest
Labels: Africans for Obama, Okereke-Oyiuke

MIxed start for our boys 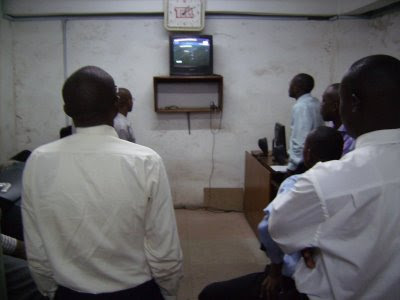 The Nigerian Olympic football teams began their challenge for gold in China on a mixed note. The female team lost 0-1 to North Korea yesterday in Shenyang. Today our boys played out a goal-less draw against the Dutch team in Tianjin. I took these photos in the office today as we all watched TV rooting and screaming for our boys to "bring it on!".

We look forward to better days ahead and hope that our boys can re-enact the feat of the 1996 team that beat Brazil and Argentina to win the gold medal at Atlanta.
Posted by Unknown at 3:14 PM 3 comments: Links to this post 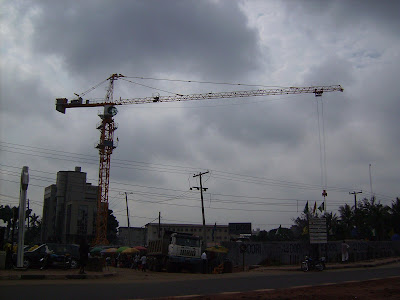 A four-storey shopping centre under construction collapsed in Abuja last weekend. About seven people were reported to have died while many other workers were injured in the disaster. It was billed to become the largest shopping centre in the emerging federal capital. When I saw this crane on a construction site in Ikeja it reminded me of the crash. This 13-storey building is where the South Atlantic Petroleum Limited, Sapetro, is domiciled on Victoria Island. It is an indigenous oil drilling company. One of the few oil companies owned by locals in Nigeria's huge but increasingly moribund oil industry.

Owing to increased attacks by militants in the country's oil Niger Delta, the country and indeed the world is suffering a shortage and therefore a rocketing increase in oil price.
Posted by Unknown at 2:22 PM No comments: Links to this post Went to a wedding on Saturday and had to wade through a heavily flooded area as you can see in this photo. The vehicle I was in was almost swallowed up by the huge rain water-filled crater in the middle of the road. This makes people sometimes question if we really do have a government in place.

Interestingly, when I got to work this morning the magazine I write for treated the issue of flooding under the environment question. It seems we have have neglected the environment for a long time and we might pay for it dearly what with the rains washing away the land in the South while the Sahara Desert slowly creeps in on us from the North. Posted by Unknown at 5:06 PM 4 comments: Links to this post Saw this stern looking security guard at a conference I attended recently at the Civic Centre. He looked very well prepared for any trouble.
Posted by Unknown at 9:00 AM 4 comments: Links to this post We had a fire expert at the office today to teach lessons on fire fighting. He took some members of staff through the process of fighting a fire with the pressured fire extinguisher. It was interesting to see my colleagues struggle with the can as they tried to point the nozzle at the raging fire all the time trying to avoid being singed.

You can be sure that there was a lot of laughter and back slapping.
Posted by Unknown at 9:00 AM 2 comments: Links to this post